Under the title: “German veteran abroad looks back on three decades in Ukraine“ following interview with HWC partner Dr. Thomas Winkelmann was published in the spring issue of Business.Ukraine, a media partner of the 4th German-Ukrainian Business Forum:

German national Dr. Thomas Winkelmann is one of the elder statesmen of the Kyiv expat scene. Having first arrived in the Ukrainian capital in the weeks prior to the fall of the Berlin Wall in October 1989, he has a strong claim to being among the city’s longest-serving German expats. Winkelmann came to Ukraine from East Germany at a time of great change in the former Eastern Bloc. Soon after settling in Kyiv with his young family, the reunification of East and West Germany began. While many of his fellow Germans chose to head home, Winkelmann decided to stay on in Ukraine and explore the opportunities that he expected to present themselves as the old divides of the Cold War gave way to a new Europe. Thus, began an expat odyssey that has lasted for more than three decades and counting.

For much of the 1990s, Winkelmann represented German industrial interests in Ukraine and the former USSR. He then spent over a decade working for one of Germany’s leading consulting companies, before establishing his own Kyiv-based outsourcing and consulting company, Henniger Winkelmann Consulting, in 2014. For the majority of this period, he has remained resident in the Ukrainian capital.

Winkelmann has had a ringside seat for many of the key events in the country’s remarkable post-Soviet nation-building journey. Looking back from the vantage point of early 2021, he reflects on the dramatic changes since the early years of independence. “Back then, everyone used to say that Ukraine couldn’t survive five minutes without Russian gas or Russian markets,” he recalls. “But Ukraine has proved everybody wrong and is growing used to life without Russia.”

The diverging paths taken by post-Soviet Russia and Ukraine is a recurring theme in Winkelmann’s reminiscences. Having worked and traveled extensively throughout both countries during the past thirty years, he identifies a number of striking differences that challenge old stereotypes of Slavic brotherhood and help to explain the growing distance between modern Russia and Ukraine. “The Ukrainian mentality was always more Western, even in the 1990s,” he says. “Under Kuchma and Yushchenko [Ukrainian presidents from 1994 until 2010], Ukrainians began to embrace personal freedoms, democracy, and private enterprise. By the time Viktor Yanukovych came to power, it was too late to reverse it all.”

Over the past three decades, Winkelmann has witnessed the transformation of the Ukrainian business climate as the country has moved from the Soviet economic model dominated by state ownership to a growing role in the global economy. “In the early days, everything was still very much oriented towards Russia, but now Ukraine exports to Europe, Asia, the Middle East, and beyond. Ukraine’s export portfolio has undergone drastic changes, with a growing emphasis on agricultural produce and gradual move towards more value-added exports.”

Winkelmann believes the historic shocks of 2014 played a decisive role in determining Ukraine’s future direction. “Every crisis creates new opportunities,” he says. “2014 forced Ukrainians to seek out new alternatives to close cooperation with Russia. Without Russia’s self-defeating attack on Ukraine, this might otherwise never have happened.”

It was during the tumultuous events of 2014 that Winkelmann chose to set up his own outsourcing and consulting company with colleague Sven Henniger. Despite the economic and political instability of the intervening seven years, the German remains optimistic about Ukraine’s prospects. He points to encouraging fundamentals such as the effective reform of the Ukrainian banking system and the establishment of adequate international currency reserves and cites Ukraine’s slow but steady progress in international business rankings such as the World Bank’s annual “Doing Business” survey. “Ukraine’s international image has also improved a lot in recent years,” Winkelmann notes. “In the 1990s, Ukraine had no international profile to speak of and most people still regarded the country as part of Russia. That is no longer the case. Ukraine has become much more visible.”

Looking ahead, the long-term German expat identifies a number of factors that are likely to drive investor interest in Ukraine. He sees huge opportunities in a range of sectors including agriculture, IT, light industry, and green energy, while also arguing that geography is strongly in Ukraine’s favor. “Thanks to its advantageous location, Ukraine is emerging as a hub between east and west with exciting manufacturing potential. Ukraine is on the doorstep of the EU, and COVID has reminded everyone of the importance of closeness.”

He believes Ukraine’s ongoing infrastructure upgrade will prove attractive to international investors, and says the business climate is also improving, with favorable terms such as low taxes and competitive costs. Meanwhile, Ukraine’s decentralization reforms are creating incentives for local authorities to accommodate investors. In terms of standards of living, Winkelmann says today’s Kyiv is light years away from the Soviet city he first encountered and points out that similarly standards of living are also available in other major Ukrainian cities such as Lviv and Odesa. “The quality and range of services on offer is recognizably European, and so is the mentality.”

Winkelmann believes Ukraine’s general geopolitical trajectory is perhaps the most encouraging indicator of all. “EU and NATO membership now enjoy overwhelming public support,” he notes. ‘For the Ukrainian people, there is no going back to the authoritarianism of old.”

About the interviewee: Dr. Thomas Winkelmann is a Partner at Henniger Winkelmann Consulting 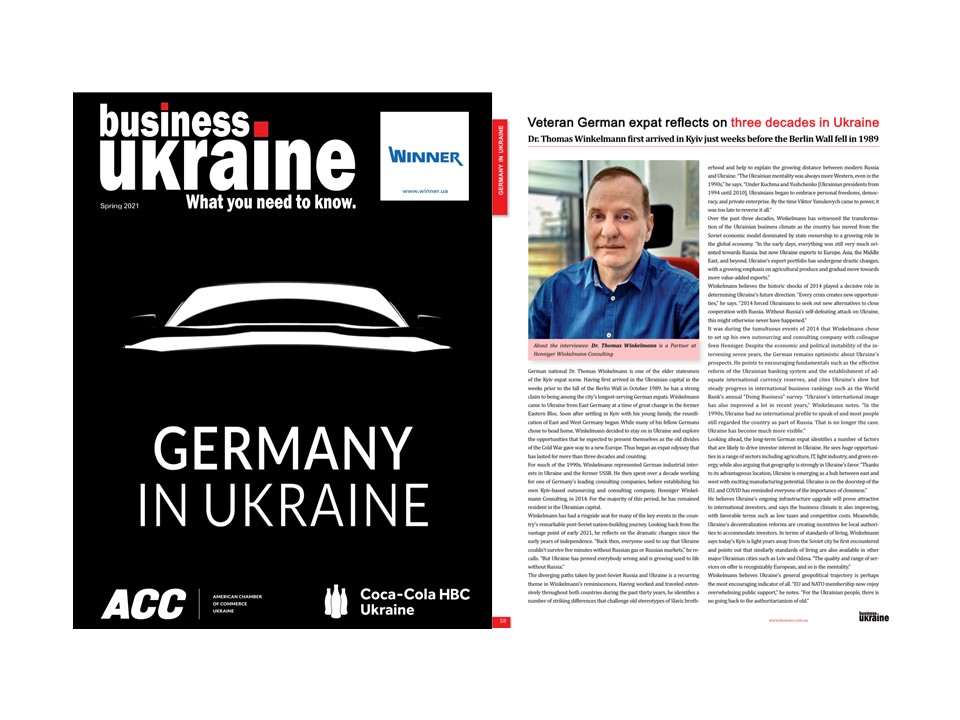